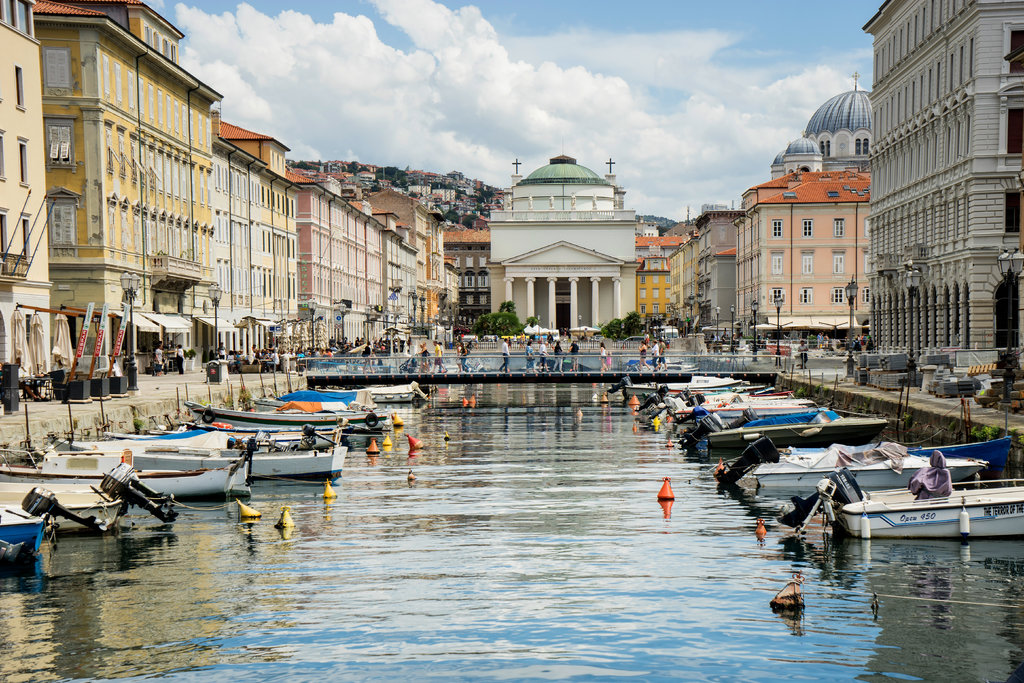 The tourist area of ​​Trieste, steeped in ancient history, is above all the San Giusto hill with its castle and cathedral. Castello (codz. 8.00-until dusk) is a 15th-century Venetian fortress, built next to the site of the Roman forum; there is not much to watch, but the walk on the embankments is obligatory. W Civic Museum (wt.-nd. 9.00-12.45) houses a small collection of ancient weapons. Cathedral of San Giusto (closed. 15.00-18.00) it is a typical Triesteian synthesis of styles. In the fourteenth century, the three churches standing here were merged into one, which becomes obvious, when you see the nave. The façade is mostly Romanesque, but it contains five Roman columns and a Gothic rosette, and the pillars at the entrance are fragments of a Roman tomb. Inside, between the Byzantine columns, there are beautiful 13th century frescoes, depicting St.. Justyna, a Christian martyr murdered during the persecution of Diocletian.

Walking down the cobblestone alley from the cathedral, przy via Cathedral 15, you come to the Museo di Storia ed Arte (codz. 9.00-13.00), containing collections obtained all over the world, covering Himalayan sculpture, Egyptian manuscripts and Roman glass.

Behind the museum, available from Piazza Cattedrale, is located Orto Lapidario, pleasant modernist place with fragments of classical sculptures, vases and inscriptions placed on the benches and against the walls, amidst a forest tribune and miniature palm trees. In a small Corinthian temple on the upper level are the remains of J.. J. Winckelmanna (1717-68), German archaeologist and neoclassical theorist, who was murdered in Trieste by a man, to whom he boasted of his collections of ancient coins.

The most important museum in Trieste is Revoltella, at via Diaz 27, housed in a Viennese style palace, which he bequeathed to the city of 1869 r. baron Pasquale Revoltella, finansista. This combination of historical collections and contemporary art galleries enjoys a high reputation, but due to bureaucratic skirmishes - allegedly over fire regulations - the museum has been closed for years. The reopening is to be done with great pomp, but not yet anytime soon.

In the nearby Museo Sartorio, przy Largo Papa Giovanni XXIII (wt.-nd. 9.00-13.00), at the bottom there are ceramics and icons, and there are overwhelming private rooms upstairs, with dark polish, tracery and poor Venetian oil paintings.

The interior of the Museo Morpurgo is much nicer, north of San Giusto, at via Imbriani 5 (wt.-nd. 10.00-13.00). The palace was donated by the merchant and banker Mario Morpurgo di Nilma, and its rooms have remained untouched since the first decoration in the 1980s. Sepia tinted photographs and other memorabilia cause, that the palazzo is not like a museum, just an apartment, whose owners went on vacation and never came back.

Risiera di San Sabba, at the southern tip of Trieste, at via Valmaura (wt.-nd. 9.00-13.00; next to the bus route no 10), embodies the most terrible chapter in modern European history - the only concentration camp in Italy was located in this former rice husk. After the German invasion of Italy in September 1943 r. a crematorium was installed here, under the supervision of Erwin Lambert, who designed the death camp in Treblinka. Nobody knows exactly, how many people died in Risiera, before 1 May 1945 r. the city was liberated by the Yugoslavs, but found 20 000 identification cards. National Socialism had many sympathizers in this part of Italy: w 1920 r. Mussolini considered the fanatics of Friuli-Venezia Giulia to be a model of the fascists, and the camp commandant was a local man. The permanent exhibition in Risiera recalls the fascist crimes in the region.

In years 1905-1915 i 1919-20 James Joyce and his wife Nora lived in Trieste. First, they stayed for a month in house no 3 na Ponterosso square, and then they moved to an apartment on the third floor in via San Nicoló 30. (W 1919 r. the great poet Umberto Saba bought a bookshop on the ground floor of the same house. Seems, that the two writers never met, though they had a mutual friend, powieściopisarza Italo Svevo.) There is no memorial plaque on Via San Nicoló, however, it is at via Bramante 4, with a quote from a card sent by Joyce to his brother Stanisław, whose irredentist sympathies led him to an Austrian internment camp. In a postcard, Joyce declares, that he had completed the first chapter of a new work, Ulissesa.