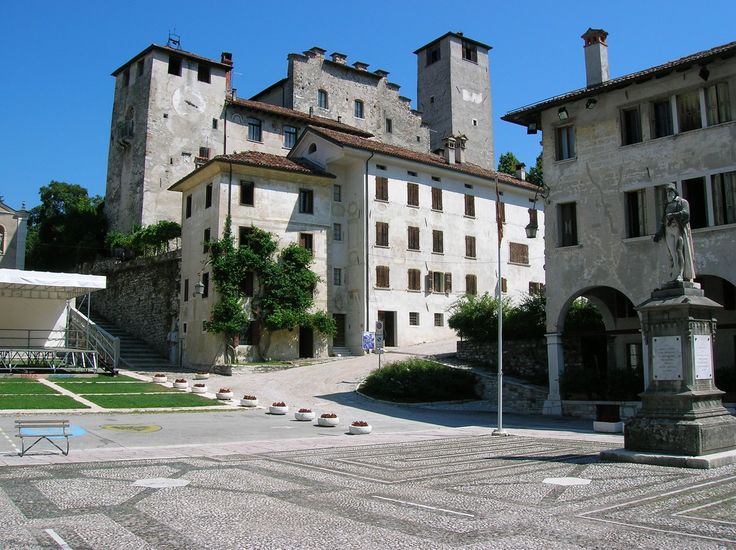 The historic center of FELTRE, perched on a narrow ridge above the new city, owes its charming appearance to the catastrophe of 1509 r., when during the war of the Venetian Republic with the League in Cambrai, the imperial troops decided to punish the city for the alliance with Venice, sweeping them off the face of the earth. The Venetians set about rebuilding, and in two decades the streets looked something like this, like now. It would be hard to find a better example of a typical 16th century city within many miles.

Only one train goes directly from Venice to Feltre (ten sam co do Belluno); more frequent connections depart from Padua (90 min). There are many connections with Belluno (30 min).

The shortest route from the station to the old town is along the viale del Piave, then via Garibaldi (with a great selection of bars, restaurants and hotels) i via Castaldi, which leads to the Duomo and the Baptistery at the foot of the ridge. The most interesting monuments in the Duomo are the Byzantine cross from the 6th century. and a tomb made by Tullia Lombardo. At the top of the steps that pass by the baptistery, across the street, there is the southern gate of the city, under which they begin long, covered stairs leading up to the heart of the old town.

It comes out next to the 16th century municipio, whose portico was designed by Palladio. Behind the surface of Piazza Maggiore, the tower of the medieval castello rises.

To the left of the square is the main street, Feltre, via Mezzaterra, descending towards the 15th-century Porta Imperiale. Almost all houses here come from the 16th century., and many are painted with frescoes by the greatest artist from the city, Lorenza Luzzo, better known as II Morto da Feltre (The dead man of Feltre) due to pale complexion. Via L. Luzzo, an equally decorative extension via Mezzaterra on the other side of the square, leads to the Museo Civico (wt.-pt. 10.00-13.00, sb. 10.00-13.00 i 16.00-18.00, nd. 11.00-13.00 i 16.00-18.00; 1000 L), where the luminous Madonna II Morta is located, paintings by Cima and Gentilla Bellini, as well as an exhibition of Roman and Etruscan finds. Some people believe, that the best work of II Mort is the Transfiguration in the Church of Ognissanti, which is rarely open, but you can try your luck walking through Porta Oria (near the Museo), then down the hill and along the Borgo Ruga for a minute.

There is also a peculiar museum in Feltre - the Museo Rizzard (VI-IX wt.-nd. 10.00-13.00 i 16.00-19.00; 1000 L), at via del Paradiso 8, parallel to via Mezzaterra. It houses a collection of contemporary art and an exhibition of wrought-iron works, made mostly by Carlo Rizzarda (1883-1931), former owner of the house. Perhaps, it doesn't sound very inviting, but the sophistication of Rizzardy's works is astonishing.