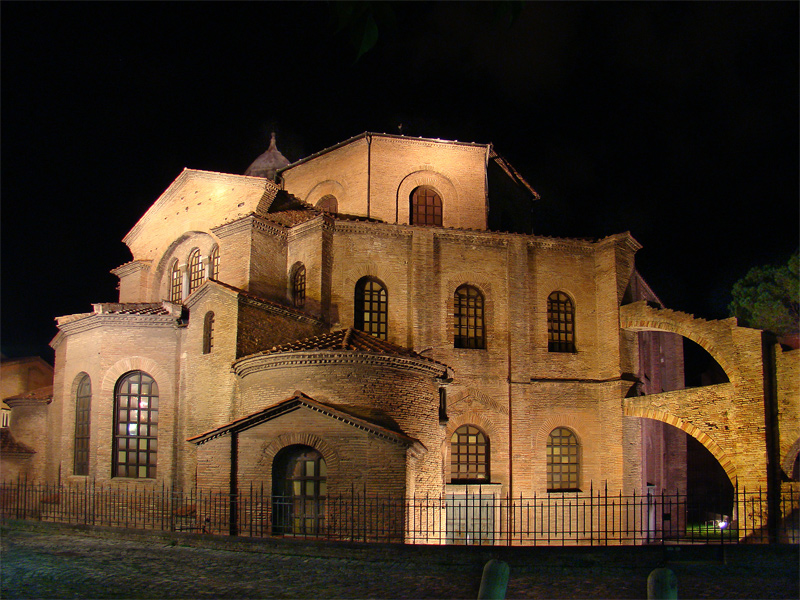 As for the monuments, it is undoubtedly the most exciting neighborhood that you can drive to in ten minutes, heading northwest of the center around the Basilica of San Vitale (codz. 8.30-19.00), where the most beautiful mosaics in the city are located.

San Vitale, started in 525 r. during the Roman emperor Theodoric, and completed in 548 r. by the Byzantine ruler Justinian, is quite a typical Byzantine church, and the development of space inspired by eastern concepts as well as the distribution of light and dark were previously unknown in Italy. The Byzantines had a geometric approach to architecture, calling it "the application of geometry to solid matter", as can be seen from this structure based on two concentric octagons, with a central dome supported by eight columns and eight recesses around the perimeter, one of which is a semicircular apse gleaming with mosaics. The Church of San Vitale and one of the most famous churches in the world, Hagia Sophia, were built at the same time.

There were strict governing rules, who appears where on the mosaics - the higher and the more to the east, the more important and holier the figure. The series begins with scenes from the Old Testament on the choir's semicircular lunettes; Christ is visible on the triumphal arch, Apostles and sons of Saint Vitalis. In the apse's hemisphere, the beardless Christ stands between two angels and presents a model of the church to Saint Vitalis and Bishop Ecclesius. The artist, however, avoided the rigid hieraticism, enlivening the work with fields and rivers, where frogs are swarming, herons and dolphins.

Take some hundred with you- and two-barrels for lighting, especially the mosaics on the side walls of the apse. The two processional mosaics are the best preserved portraits of Justinian and his wife Theodora, excellent examples of the Byzantine mosaic technique. The cubes of the glass tesserae are arranged in rows, every second from a different angle, to vary the light reflection and give the impression of depth. Color is used symbolically, the golden background signifies holiness or high status. As an additional symbol of superiority, Justinian's foot was placed on the foot of his general, Belisarius, who recaptured Ravenna Gotom.

The richly dressed Theodora looks strict, and she was indeed famous for her cold cruelty, organizing the "disappearances" of everyone, who opposed her. In the sixth century. A story, that is, a secret history, the chronicler Procopius writes, that her career was dizzying. As a child, she and her two sisters earned her living as a prostitute and circus performer, then she became a courtesan and appeared in perverse erotic performances. She traveled in the Middle East, and on her return she attracted the attention of Emperor Justinian. To the court's dismay, he rejected the daughters of his Romans equal to him and lived with Theodora, elevating her to the rank of a patrician. He was not allowed to marry her, until the Empress Mother died and the law was not changed; after the wedding, the couple began a period of government characterized by extreme corruption and looting.

Separated by a lawn from the basilica is the tiny Mausoleo di Galla Placidia (codz. 8.30-19.00), named after the half-sister of Honorius, to which Ravenna owes much of its early splendor, but despite the name and the three sarcophagi inside, it is unlikely, that there are ever her remains in the building. Galla Placidia was captured, when the Goths sacked Rome, and caused a scandal in the Roman world by marrying one of her captors, Ataulfa; she then accompanied him in the battles, as his army advanced south. Later, they ruled together over the Gothic kingdom; when Ataulf was murdered, The Romans bought Gaul for grain, after which she was forced to marry the Roman general Constantius. Their son was crowned Emperor Valentinian III at the age of six and, as his regent, Gall, seized power over the Western Empire.

Inside the building, the light streaming through the narrow alabaster windows falls on the mosaics with a dark blue sheen, made in an earlier style than the works in the basilica, with numerous Roman and naturalistic motifs. There are stars around the golden cross on the vault; four volumes of the Gospel are on the shelves of a small cabinet, there are also symbolic depictions of the apostles - the lion of St.. Mark and the ox of St.. Luke - situated in the sky in the place of the corresponding constellations. At the ends there are representations of St.. Lawrence with a grate, on which he died a martyr's death, and the Good Shepherd.

From the south, it is adjacent to the Church of San Vitale, the National Museum of Antiquities housed in the former cloisters (wt.-nd. 8.30-13.30), including items from later eras; so, next to early Byzantine glass, you can see 15th-century Florentine icons and embroidery here. One of the most eye-catching exhibits is the statue of Hercules catching a deer, VI w., possibly a copy of a Greek original and a very late example of thematic classical inspiration, as well as the so-called. Class Woal, decorated with portraits of Verona bishops from the 8th and 9th centuries.