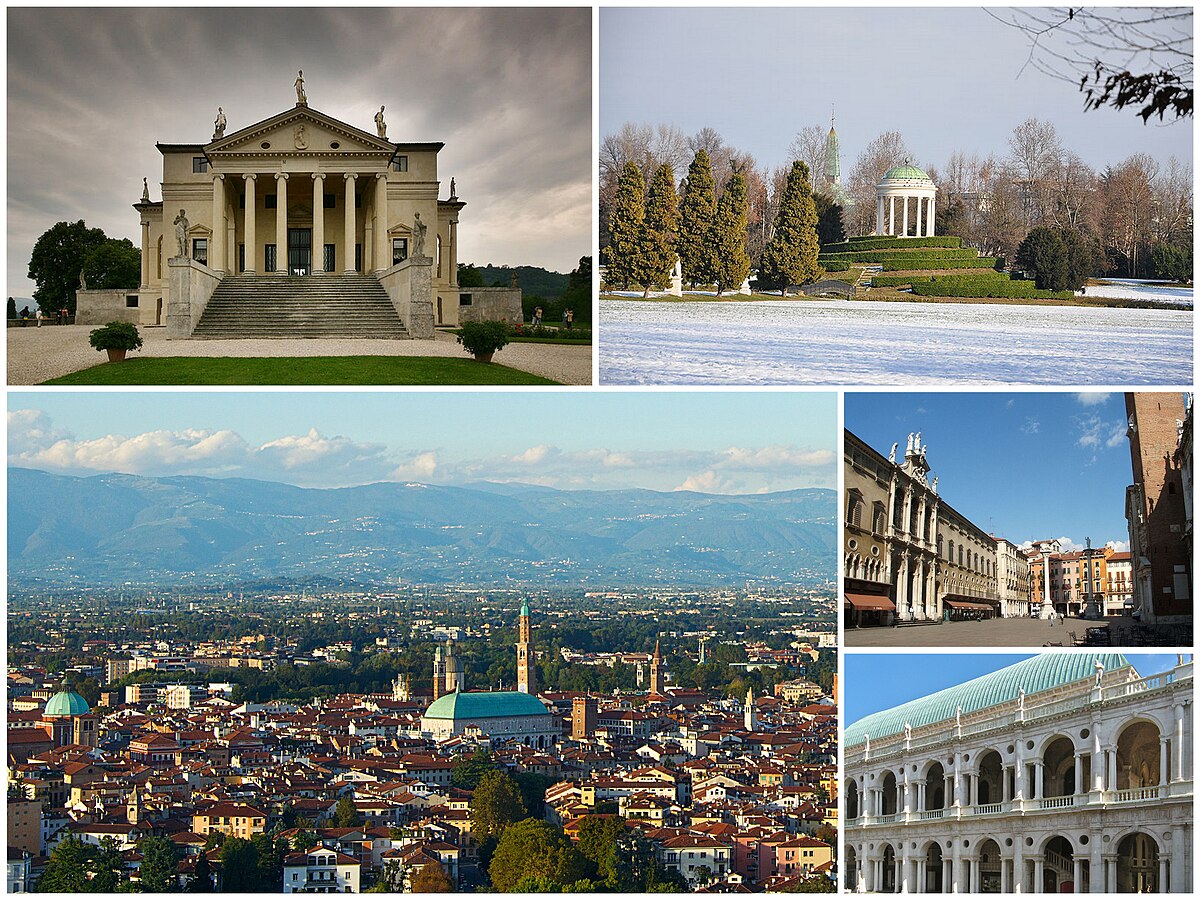 As the largest textile producer in Europe and the capital of the Italian "Silicon Valley", VICENZA is a very exclusive city, where probably every second car is a BMW. However, the contemporary economic development has not destroyed the historic district. City center, still partially surrounded by medieval walls, is an amalgam of gothic and classical buildings and looks almost identical to the last major reconstruction in the 18th century. The historic core is compact enough, that it can be visited in one day, but the city and its surroundings deserve a little longer stay.

W 1404 r. Vicenza was absorbed by Venice and the status of a satellite city is reflected in many Gothic palaces. However, in the second half of the 16th century. the city was transformed by an architect, which owed nothing to Venice and which is rigorous, but the versatile style would affect all generations to come - it was Andrea Palladio, actually Andrea di Piętro della Gondola.

Born in 1508 r. in Padua, Palladio arrived in Vicenza at the age of sixteen, to apprentice as a stonemason. At the age of thirty he became a protégé of the local notable, hrabiego Giangiorgia Trissino, who made him an architect, he gave it a classicizing name and ensured contacts with the powerful of Vicenza. For a year 1540 until his death in 1580 r. Palladio created about a dozen palaces and public buildings in Vicenza, and the variety of these designs will amaze those, who associate palladian with monotony. If you believe the saying of Herbert Read, that "from the back of every dying civilization there is a bloody Doric column", perhaps you will leave Vicenza converted.

Main street of Vicenza, Corso Andrea Palladio, it crosses the old town from Piazza Castello to Piazza Matteotti and is surrounded by palaces, which currently house stores, offices and banks. The last palace built by Palladio, niekompletny Palazzo Porto-Breganze, rises on the other side of Piazza Castello; judgment no 163 next to Corso, Cogoilo House, it is called Casa del Palladio, although the architect has never lived there and hardly anyone believes, that he designed the building.

The Corso ends with one of the most dignified edifices of Palladio, Palazzo Chiericati (construction started in 1550 r.), where the Museo Civico is now located (wt.-sb. 9.30-12.00 i 14.30-17.00, nd. 9.30-12.00; 3000 L, combined ticket to the Museo and Teatro Olimpico 5000 L, w nd. 3000 L). The core of the painting collection consists of works by local artists, none of which claim to be a masterpiece; however, there are several names, such as Memling, Tintoretto, Veronese or Tiepolo, thanks to which a visit to the museum is unforgettable.

There is a building on the other side of Piazza Matteotti, must see - Teatro Olimpico, the oldest covered theater in Europe (16 III-15 X pn.-sb. 9.30-12.20 i 15.00-17.30, nd. 9.30-12.20; 16 X-15 III pn.-sb. 9.30-12.20 i 14.00-16.30, nd. 9.30-12.20; 3000 L, or a combined ticket available at the Museo Civico). When in 1579 r. members of the Olympic Academy (societies of humanities) they asked Palladio to design a permanent theater, the architect invented the indoor amphitheater based on the reading of Vitruvius and the studies of Roman structures in Italy and France. He died shortly after work began, and the project was overseen by Scamozzi, which completed it with a panorama of the classic city at the back of the stage, creating the illusion of long city boulevards, telling the "streets" to converge at a very sharp angle. The theater was opened 3 brand 1585 r. the peculiar spectacle of King Oedipus and there are still performances and concerts here.

In the middle of the city, przy Piazza dei Signori, the most overwhelming Palladio formation rises, basilica. Her project, with 1540 r., was Palladia's first public activity (although the construction itself was completed in the second decade of the next century) and made him famous. Before Palladio got to work, the building was an unstable gothic hall structure, where the city council resided. The architect surrounded it with a wreath of Doric and Ionic columns, great at solving the buttress problem. Currently, exhibitions are sometimes held here (wt.-sb. 9.30-12.00 i 14.30-17.00, nd. 9.30-12.00; Free entrance).

Just like it was in the 16th century., yes and now behind the basilica - in Piazza delPErbe there is a fruit market, vegetable and floral; however, in the shops along the river, prices are much lower. On Thursdays, a general market is held in the streets between the basilica and the Duomo.

On the opposite side of Piazza dei Signori, in front of the basilica, stands the unfinished Loggia del Capitaniato, late work by Palladio. It was built as the headquarters of the Venetian commander of the city and is decorated with reliefs depicting the victory of the Venetians over the Turks at Lepanto in 1571 r.

W 1944 r. The Duomo was completely bombed, and carefully rebuilt after the war; it is a rather gloomy place and stands out only as one of the few Italian cathedrals overshadowed by secular buildings. Much more interesting is the one from the thirteenth century. Dominican Church of Santa Corona (in summer every day. 9.30-12.30 i 15.30-18.30; in winter every day. 9.30-12.30 i 15.00-18.00), on the other side of the Corso Palladio (bliżej Matteotti Square). Here you can find two of the three great church paintings in Vicenza - The Baptism of Christ, late work by Giovanni Bellini and Adoration of the Magi, painted in 1573 r. by Paola Veronese. The last image of this trio is the typically phlegmatic and sensual Madonna and Child, st. George and St.. Lucia by Palma Vecchio in the nearby Church of Santo Stefano (codz. 9.00-11.00 i 16.00-18.30).

Against Ports, Corso Fogazzaro the parks

The Church of Santo Stefano is almost opposite Palazzo Thiene, another building designed by Palladio. The palace was to occupy the entire stretch of the street up to Corso Palladio, but in practice only this wing was added to the previously existing 15th-century building. The facade of the old house overlooks Contra Porti, street, which is an example of the way, how the builders in Vicenza integrated new buildings into old ones, without compromising the harmony of the building development; despite the fact that the local palaces are two hundred years apart by pedigree, one gets the impression of consistency. The 14th-century Palazzo Colleoni Porto stands out (no 19) and the neighboring Palazzo Iseppo Porto Palladia, designed a few years after the Thiene Palace. Parallel street, Corso Fogazzaro, completes the overview of the Palladia buildings: under no. 16-this is where Palazzo Valmarana is located, perhaps the master's most eccentric design - on the sides of the facade, where one would expect the columns, there are giant stucco figures.

Contra Porti leads to the Pusterla Bridge and Parco Querini, the largest green area in the city, animated by a pretty hill full of ducks, rabbits and peacocks. Another refuge for the architecture weary is Giardino Salvi (at the end of the road from the train station), more modest, an artificial park with meandering cinder paths and fountains.