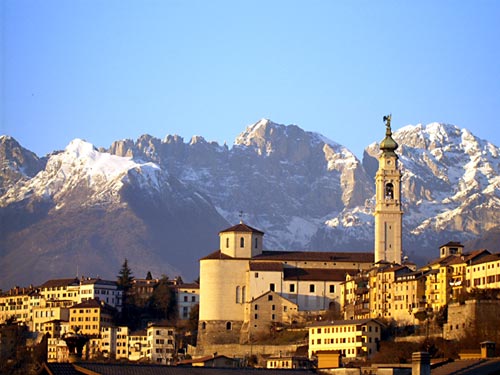 BELLUNO is the northernmost major city of Veneto. Formerly, it played the role of an important ally of Venice, and is currently the provincial capital, which extends mainly into the eastern Dolomites. There is only one direct train connection to Venice per day, but it does not take longer to travel with a change in Conegliano.

Although the cities south of Belluno are not too far away, however, it points clearly to the north - here is the junction of the Dolomiti-Bus network, trains run regularly through the Piave valley to Calalzo, and tourist brochures are mainly about hiking and skiing. (For information on Cortina d'Ampezzo and the northern edge of Veneto, see: Trentino Alto Adige.) The main attraction of Belluno is its location, but in the old town you can spend about two hours. The cheapest hotel in Belluno is Da Mares, at via F. Pilgrims 4 ( 0437/22860), about 30000 L for the room. Tourist information is available from the ASVI Viaggi office, Piazza dei Martin 27e(pn.-pt. 9.00-12.30 i 15.30-19.00, sb. 9.00-12.30).

The center of the new city, where you can find the most popular bars and cafes, stanowi Martyrs' Square, from which runs south a street leading to Piazza del Duomo, the nucleus of the old city. 16th-century Duomo, a mixture of gothic and classicism, was designed by Tullia Lombardo and built in yellow stone, characteristic of the architecture of Belluno; the building was reconstructed twice after earthquakes, w 1873 i 1936 r. There are two good paintings inside, by Andrea Schiavone (the first altar on the right) the Jacopa Bassano (third altar on the right). Static campanile, designed in 1743 r. by Filippo Juvarra, offers one of the most beautiful views over Veneto.

Palace of the Rectors, from the end of the 15th century, decorated with baroque ornamentation, takes up one entire edge of Piazza del Duomo and was once the seat of the Venetian city government. On the right side there is a relic of more independent times, The 12th-century Torre Civica, all, what is left of a medieval castle. Przy via Duomo, on the side of the town hall, it houses the Museo Chico (wt.-sb. 10.00-12.00 i 15.00-18.00, nd. 10.00-12.00; 2000 L); the collection includes numerous works by three of the most famous Belluń artists - painters Sebastiano and Marco Ricci and woodcarver and sculptor Andrea Brustolon - who were born here between 1659 do 1673.

Cathedral Street kończy się na Market Square, a tiny square surrounded by Renaissance houses with porticoes. Main street of the old town, via Mezzaterra, leads to the medieval Porta Ruga (you have to go left on the paved road, 50 m from the end of the street), from where there is an almost as beautiful view as from the campanile.