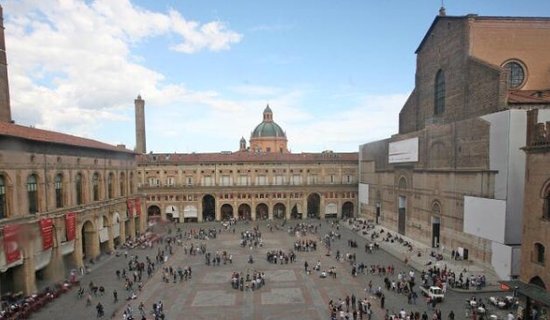 Bologna city center is very compact and most of the noteworthy sights are inside the viale, i.e. the beltway. One of the main streets, via dell’Indipendenza, leads from the station to the center, it is surrounded by cinemas and bars and is always busy; it ends in the central Piazza Maggiore and Piazza del Nettuno. To the right is the shopping district, limited by office buildings at via G. Marconi, and on the left the university district. It immediately catches the eye, how well the centro storico is preserved: Bologna is a city that takes its history very seriously and plans to restore arcades and churches in the center are consistently implemented. This may be a cause of disappointment, because often the sign on the church suggests, to return in 1994 r., but walking through the old town itself is one of the great pleasures.

Life in the city revolves around Piazza Maggiore and this is the obvious starting point for your visit; traffic never seems to die here: the cafes are overcrowded in the morning, they only depopulate a little before passeggiata. All social life takes place here, here too - and next door, in the neighboring Piazza Nettuno - there are the most important secular and religious buildings: cathedral, Palazzo Re Enzo i Town Hall, which impress with their sheer size - reinforced with buttresses and perforated with holes from the original scaffolding. In the center of Piazza Nettuno, rises made in 1566 r. by Giambologna the statue of Neptune, city ​​symbol, which the pigeons liked. West of the statue, stairs lead through a small courtyard to the upper rooms of the Palazzo Comunale (pn. and Wed-Sat. 9.00-14.00, nd. 9.00-12.30; Free entrance). Some of them are used by local authorities, while in other rooms there are galleries of paintings and decorative furniture - it is worth going there more because of the view of the square than any specific works of art. On the opposite side of the square is Palazzo Re Enzo; here after the Battle of Parma, w 1248 r., the king of Sardinia was imprisoned for twenty years, Enzo (hence the name of the palace). The city's tourist office is now located on the ground floor of the palazzo.

San Petronio rises to the south of Piazza Maggiore, the largest church in the city and one of the most beautiful Gothic brick buildings in Italy. Originally, the church was to be even larger than the Basilica of St.. Peter in Rome, but the money and the land for the aisle were allocated by the papal legate in Bologna for the construction of the university and the design of the architect Antonio di Vicenzo had to be modified.

In the left part of the basilica you can see the beginnings of the planned aisle: it is only brought up to a third of its height, with a lancet window cut in half and a fragment of a marble ornament on the facade. In the basilica museum (codz. 10.00-12.00, wt. and Thurs.. closed) there are models showing the building as intended.

Despite this depletion, San Petronio is a beautiful example of architecture from the end of the 14th century. Above the central portal there is a beautiful statue of the Madonna and Child, made by Jacop della Quercia. A number of treasures can be found in the side chapels, including 15th-century frescoes - Madonna and Child by Giovanni da Modena and Heaven and Hell by Jacopa di Paolo. The strangest monument in the church is the astronomical clock - a bronze meridian placed at an angle to the floor and a special hole in the roof, through which a ray of sunshine falls.

Having passed via deH’Archiginnasio from San Petronio, you come to the rather stuffy Museo Civico Archeologico (wt.-sb. 9.00-14.00, nd. 9.00-12.30), where the descriptions of the exhibits are equally imperfect, as in all of Italy. However, the Egyptian and Roman monuments on display here are of high value, and the Etruscan department - composed of finds from Etruscan Felsina, which became Bologna - is one of the best outside of Lazio. You can see the reliefs of the tombs here, vases and richly decorated brown situla from the 5th century. p.n.e.

Further, on the same street, is located Archiginnasio, University of Bologna founded around the same time, when Piazza Maggiore was being built; it is the oldest university in Europe, although it received its own building only in 1565 r., when Antonio Morandi was commissioned to erect a building that still stands today on the site previously reserved for the Basilica of San Petronio. Merging the university into a single building provided a way to keep students under control over the period, when the Church felt particularly threatened by the Reformation. You are allowed to enter the main courtyard, covered with the coats of arms of more famous graduates, and maybe even listen to a lecture - Umberto Eco teaches semiotics in Bologna. There is also a library upstairs. However, the most interesting of the old university halls is the Teatro Anatomico (pn.-pt. 9.00-19.45), original section room of the medical faculty. Rows of seats surround a peculiar professor's chair, with a canopy supported on figures called "gli spellati" (stripped of the skin). Due to church prohibitions, not many sections were performed here, but on these, that were taking place (generally around the carnival), artists and ordinary townspeople came, not only as an opportunity for anatomical studies, but also as a social event *.

In Piazza Galvani, near the old university, there is a monument to the physicist Luigi Galvani. He was one of the most prominent Bologna scientists, discovered electric currents in animals; the terms come from his surname: electroplating or electroplating. Going south via Garibaldi, after a few minutes you will reach Piazza San Domenico, where the bones of medieval lawyers rest in the canopy-covered tombs. Bologna contributed to the settlement of disputes between the Pope and the Roman Emperor in the 10th and 11th centuries., earning the nickname "la Dotta" (Scientist), which formed the basis of the foundation of the world's leading law faculty at the university.

Church of San Domenico (closed. 12.00-17.00) built in 1251 r., in order to house the relics of St.. Dominika, which were deposited in the so-called. Arch of San Domenico, marble tomb, started by Nicola Pisano, and it finished (until the 15th century) many other artists. Pisano and his students carved reliefs illustrating the saint's life, except that the figures on the top are the work of Pisano himself; Niccoló delFArca made the canopy, and the angel and the figures of Saints Proculus and Petronius are the work of the young Michelangelo.

To the right of via delPArchiginnasio at via Pescerie Vecchie and via Draperie, The market is Mercato di Via Clavature, which is a certificate, how much the good reputation of Bologna cuisine is deserved. Especially in autumn the market is a feast for the eyes and ears: you can buy great porcini mushrooms here, truffles in baskets full of rice, opasłe mortadele, suspended pheasants, ducks and hares, and kilos of skinned frogs.