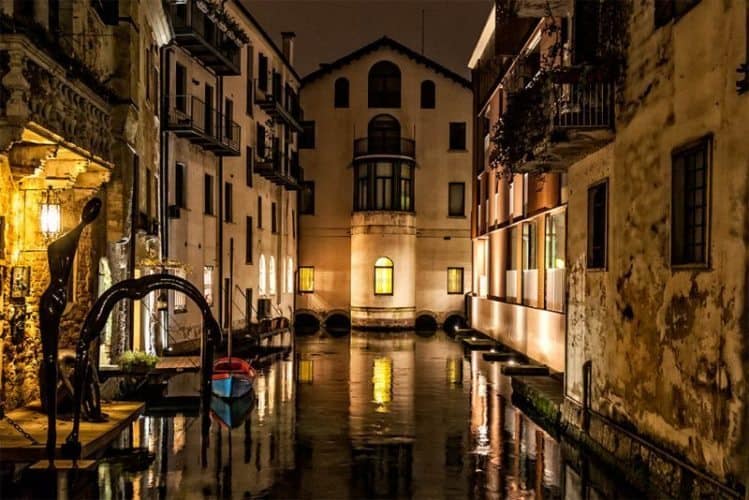 The local tourist office is perhaps exaggerating a bit, that the TREVISO waterways resemble Venice, but the historic center of the bustling provincial capital is much more alluring, than you can tell from a glance on the way to the airport. Treviso was an important city long before Venice was assimilated into 1389 r., and the evidence of this is found in many testimonies in the form of Gothic churches, public buildings, and especially the paintings by Tomaso da Modena (1325-79), one of the greatest artists of Northern Italy shortly after Giotto's death. The urban landscape inside Treviso's 16th-century walls is also pretty - long porticos and frescoed house facades give many streets a character quite different from other cities in the region.

The mentioned attributes of Treviso are well preserved on the main street of the center, Calmaggiore, where is modern trade (he is personified by the ubiquitous company "Benetton") has reached a kind of compromise with the past, in which Italians seem to be at the forefront of the world. A bigger role, than you might imagine, Modern construction techniques played in reaching this compromise - Treviso was strained during both world wars, and on Good Friday 1944 r. half demolished during the bombing raid.

One of the victims of the bombing was the Palazzo dei Trecento from the beginning of the 13th century., at Piazza dei Signori - the line outside shows, from which point the building was renovated. The adjacent Palazzo del Podesta is a 19th-century structure, adapted to the style of the environment.

The two churches at the back of both palaces are more interesting, San Vito i Santa Lucia. In the tiny dark chapel of Santa Lucia are large frescoes by Tomaso da Modena and his followers; San Vito has even older paintings in a niche, via which to enter from Santa Lucia, though they are not in the best condition.

Cathedral of Treviso, San Floor, rises at the end of Calmaggiore (7.00-12.00 i 15.00-19.00). Established in the 12th century. the church was rebuilt many times in the following centuries, and after the devastation of v 1944 r. has been reconstructed. The interior is interesting mainly for the crypt - a thicket of 12th-century columns with sheets of medieval mosaics - and the Cappella Malchiostro, with frescoes by Giovanni de Sacchis Pordenone and the Annunciation of Titian.

Right across the River Sile, walking from the train station, there is the austere Dominican Church of San Nicold, with frescoes from the 13th to the 16th century. Some of the columns are decorated with paintings by Tomaso da Modena and his school, and the best of them is St.. Jerome and St.. Agnes (the brush of Tomas), on the first column to the right of the entrance. Equally striking, although much more grateful, is the Tomb of Agostino d'Onigo, sculpture by Antonio Rizzo, decorated with paintings by Lorenzo Lotto, located in the presbytery of the church.

The figures of Saints Hieronim and Agnes are a perfect introduction to the work of Tomaso da Modena, but for a more exhaustive survey of his painting one has to go to the neighboring Seminario, whose chapter house is decorated with forty Portraits of members of the Dominican Order, made in 1352 r. (Pn.-pt. 9.00-12.00; Please ask to be admitted at the office opposite the west end of the church.)

There is another great series of frescoes by Tomaso da Modena in Treviso - The Life of St.. Ursula, currently housed in the deconsecrated church of Santa Caterina, across the center from San Nicoló. Other frescoes by Tomas and his school can be found in the Cappella degli Innocenti in this church. To get inside, call the Museo Civico and make an appointment (• 0422/51337; wt.-sb. 9.00-11.30 i 14.00-16.30; 1000 L).

The neighborhood of the church is nice, dominated by antiques dealers, furniture restorers and stalls around the fish market. There are also two other churches here, worth a look. North of Santa Caterina is the rebuilt 13th-century church of San Francesco, a spacious structure with a ship's keel-shaped roof and fragments of frescoes, including Madonna surrounded by saints by Tomaso da Modena (in the chapel north of the presbytery). Toward the south, at the end of via Carlo Alberto (one of the most attractive streets in the city), there is the Basilica di Santa Maria Maggiore, where the most venerated image in Treviso - Madonna - is located, originally painted by Tomas, and then retouched.

Recommended route from the center to Museo Cirico on Borgo Cavour (wt.-sb. 9.00-12.00 14.00-17.00, nd. 9.00-12.00; 1000 L) is via Riccati, with a number of beautiful houses. The ground floor of the museum is occupied by archaeological collections, mainly from the Bronze Age and Roman times; the collection of paintings on the first floor is mediocre as well, except for a few works - The Crucifixion by Jacop Bassano, A portrait of Sperone Speroni Titian and a portrait of a Dominican Lotta.

The EPT office is located in Palazzo Scotti, via Toniolo 41; the Carnet del Turista they are distributing will provide you with a list of all the hotels, restaurants and museums in the province of Treviso, along with prices and opening hours.

There are a number of restaurants in Treviso with an established reputation and correspondingly high prices. However, you can eat cheaply at All'Oca Bianca, przy alley of the Tower 7 (Wed. closed). Meals at Allo Colomba (look up) they are simple, filling and really inexpensive.

The most popular bars and cafes in Treviso are located in the Palazzo dei Trecento; San Vito also has a lively atmosphere, San Vito square 40, niedaleko Piazza dei Signori; knowing AC Milan is very useful there.