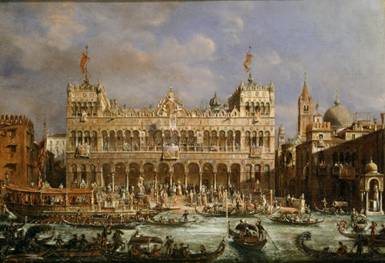 The biggest attraction of the right bank of the canal is Fondaco dei Turchi. Initially, it was a private home, and from the 1720s until the year 1838 it was the seat of Turkish merchants in the city. The building underwent a fairly brutal restoration in the last century, but nevertheless the towers and the arcades located at the water level give a fairly good idea of ​​the architecture of a typical Venetian-Byzantine palace. Today it houses the Museo di Storia Naturale (nature museum).

Nearby is the ornate Ca 'Pesaro, completed in a year 1703, long after the architect Longheny died. Unlike other palaces, which because of the cost of the stone, but also due to the potential possibility of building new houses in the neighborhood, they have brick sides, not only the facade, but also the side wall of Pesaro is made of stone. Today, the palace houses the Galleria d'Arte Moderna and the Museo Orientale.

Further on to the right bank, you won't find buildings of particular interest until the Rialto Fair, which begin with erected in the year 1907 neogotyckiego Fish market (fish market). Older buildings behind it, New Factories of Rialto i (moved away from the shore) Old factories of Rialto, are the works of Sansovin and Scarpagnin respectively, and replaced those that had been destroyed by the fire of a year 1514 earlier buildings. A large building, Palazzo dei Camerlenghi, located by the Rialto Bridge (1525) was the seat of the Venetian Ministry of Finance.

The series of Gothic palaces around Volta make up one of Venice's most magnificent architectural ensembles. W Ca’ Fóscari, called by Ruskin "the noblest example in Venice” late gothic (1435), lived the Doge Francesco Fóscari, whose unusually long period of power (32 patch) ended with his removal from his post. This happened, inter alia. as a result of long, a ruthless campaign against him, led by the house of Loredano and their followers. The Doge died in a year 1457, just a few weeks after leaving the Palazzo Ducale. Ca ’Fóscari is adjacent to a pair of adjoining buildings from the same period, Palazzi Giustinian, where Wagner wrote the second act of his Tristan.

A little further away, there is Ca 'Rezzonico designed by Longhena, which is similar in size to Ca ’Pesaro, but its architecture is a bit calmer. The palace began to be built in the year 1667 Bon family, but her financial resources did not match her ambition and she had to sell it to the Rezzonico family. This one finished the work, and even had a ballroom and an additional staircase built at the rear. Most of the palace is open to visitors, because it is home to the Museo del Settecento Veneziano. The unfinished Palazzo dei Leoni (za Campo San Vio) was to be the largest palace on the canal, but started in a year 1759 construction never extended beyond the first floor, probably due to the owners' ruinous costs. The body of the building and the platform, on which it was erected, now occupies the Guggenheim Contemporary Art Museum.

The building, which stands out from the museum to Dogana di Mare (the customs office) at the end of the channel, is the miniature Palazzo Dario, located two houses away from Palazzo dei Leoni. He was compared by Henry James to "a house of cards, who keeps such a shaky balance, that it would be enough to touch him, to fall”. The palace was built in the eighties of the 15th century not for a Partisan family, but for an employee of the state administration, Giovanni Dario. The multi-colored marbles on the façade are characteristic of the Lombardo family work, and the design of the palace could have been made by the founder of the dynasty himself, Lombardo floor.