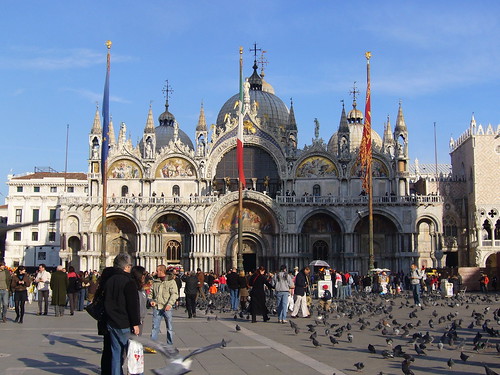 Open space between San Marco and the Molo coastal boulevard, Piazzetta, was the place, where, before official meetings, politicians gathered informally on the backstage broglio (intrigues). Opposite the Palazzo Ducale rises widely admired, Sansovin's Renaissance masterpiece, Libreria San-soviniana (or Biblioteca Marciana). In December 1545 construction works were well advanced, as severe frost hit and much of the building collapsed, and the architect was put in prison for a while. The building was completed twenty years after Sansovin's death, in year 1591.

The Museo Archeologico part of the building is accessed through the door in the loggia (wt.-sb. 9.00-14.00, nd. 9.00-13.00; 2000L). In many cities, such a rich collection of Greek and Roman sculptures would deserve an enthusiastic recommendation, but in Venice it is enough to leave it for a rainy day. The building of Zecca, facing the sea, is adjacent to the library (mint), which was erected in the years 1537-1545 in the place of the former, 13th-century mint. At the beginning of the 15th century, the city was so rich, that the Venetian currency was an inseparable part of every European stock exchange, and the Doge could rightly call Venice "the mistress of all Christian gold".

The two columns standing on the Piazzetta were brought here from the east at the end of the 12th century. Third column, which was brought with the same transport, fell off the barge and is still resting somewhere at the bottom near the Pier. On one of the columns there is a figure of the patron saint of Venice from the period of dependence on Byzantium, st. Theodora, on the other, similar to a lion, St.. Make a chimera. Because there were public executions between the columns, performed in various ways, from simple hanging to smoking alive upside down, superstitious Venetians still avoid passing between them.

Sometimes the heads of newly killed villains were placed on the other side of the Piazzetta, at the corner of the basilica, porphyry block, called Pietra del Bando. Basically, however, this lump (and another similar to Rialto) it was intended for the proclamation of the laws of the Republic. The two square blocks next to it were probably stolen from Constantinople during the most heinous event in Venice's history, fourth crusade of the year 1204. Many more loot was brought from this expedition, which you can see when visiting the cathedral of St.. Brand.